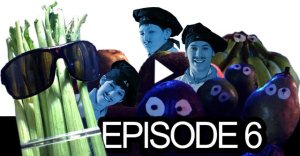 Check out our Webshow!  The Animation Chefs show kids how to make their own movies with iPads and smartphones. Each episode is loaded with ideas for digital storytelling, custom animation, app reviews, secret recipes and so much more. Entertainment, education, engagment! For kids by kids.

Animation Chefs can be enjoyed on a number of levels. If you are between the ages of 6-16, it can be a great resource for ideas, how-tos, and entertainment as kids show kids how to make cool content with secret recipes, app reviews, demonstrations, storyboarding, sound design, etc.

For adults, you will recognize the principles behind media literacy, visual literacy, or 21st century literacy – whatever you want to call teaching kids how to make-meaning and express themselves with digital imaging/sound tools.

We think you will enjoy each episode of the Animation Chefs. Give them a try and see if you don’t look at the world of youth and media in a different light.

Three years ago, while doing a brief residency with film students at Muhlenberg College in Pennsylvania, the students requested I use Facebook to share project ideas and to communicate. I was not on Facebook at the time, but, being a flexible fellow, I obliged.

Back then, according to insidefacebook.com, the numbers went something like this:

Facebook’s rise has been meteoric. For those interested in the current state of Facebook user data, go here.

Facebook is now bigger than the US. Canadian, and Japanese populations put together.

The essence of Facebook’s appeal is vanishing. It can be summed up in one word…privacy.

The original appeal to the college market was the in-group dynamic. Only colleges used it. Not mom and dad. Not your local politician, not the spammy internet marketing weirdo. Just students. Students who value privacy.

Now, with Facebook’s compromised security status, ie. twice yearly updates momentarily open up all information in Facebook to be indexed by bots and spiders, the appeal is waning. I have been defriended by three long time Facebook users recently. They have simply shut down.

Here’s the thought process as far as I can tell:

“I love Facebook. I have 325 friends. But someone hacked a friend and sent me a message with a virus filled link. I trust that friend, so I clicked it. Now my machine doesn’t work. Not only that, the ads are becoming more intrusive, and everytime one of my friends joins a “group” or suggests and “app”  I cannot join unless I agree to “give up” all my profile info. This place is getting too crowded. I don’t trust it anymore. I wonder if there is something out there like Facebook used to be…”

Hence the emergence of sites like joindiaspora.com started by college students from NYU. It is taking off like a wildfire in Santa Ana winds.

Does their tagline sound familiar?:

“We think people’s private and personal control is in jeopardy more than ever online, and every day we hear about more and more of our peers who say that Diaspora is something that they want and need…”

Their peers are leaving Facebook because it is no longer something they want or need. People crave privacy. People want to carve out their own “safe” place online.

If you like your online life ensconced, fenced in, behind closed doors…you’ll be able to find more than a dozen Diasopra like sites in the coming months. And you wont find college students going over to the other big social sites either.

They’ll want something new, unheard of, and ahead of the curve. What a great time to be an upstart social networking site. Facebook is throwing off all sorts of disillusioned devotees.

Are Facebook’s day numbered? No. It will be here for some time. 400 million people don’t go away overnight. But the core group of drivers which got Facebook off the launching pad are off to greener, more private pastures. For them, the question is moot.

Highlights from Our Animation Festival

Here’s a re-post of the clips from our Animation Festival in New York last night. As per many of you requested, her’s the 16 world premieres and standing room only fest in NY! We could have run the city for days on their energy. You had to be there, but this is the next best thing. I am very proud. Another 200 kids are now film makers, stars, and distributors!

This is a live demonstration of WordPress. We have 3 out of 30 people who stayed around to see this earthshattering event. These three champions will be the one’s hired when their name are googled. The others are on their own.

Imaging a Future of Visual Computing – The Sixth Sense

Every once in a while I come across something that makes my jaw drop. TED has always been a source of inspiration, but this takes the ideas discussed on this blog to a whole new level.

Imagine a computer with no screen, which is totally mobile and totally interactive.

Thanks to Irwin for this.

2 yr-old and the iPad

In case you were wondering why I think seven billion channels is not a fantasy. Now every man, woman and CHILD has the ability to be connected via things like the  iPad. This presents many opportunities and risks. Your response to this video will be interesting.

Fun with Time and Space

I’ve just finished helping my high schooler with a paper on Einstein and Picasso. Turns out they both were really into popular scientific writings of their time. One of the biggest influences on them both was Henri Poincaré, a mathemetician and scientist author. Poincaré wrote books for the layperson interested the latest scientific thought and breakthroughs. Poincaré made science fun, and he loved to play with time and space. His imaginings playfully danced around the ideas which Einstein and Picasso later used in their work to some effect. (understatement) He was part of the catalytic force which jump-started Picasso and Einstein down the path to integrating time/space relativity into their work.

It’s a “fun” bit of history. Both these great artists were very playful in their approach. They were having fun. Steve Martin wrote a play about this dynamic, and Arthur Miller wrote a book. Both are fun reads.

Here are two videos, non-sequiturs to be sure, in which time and space are made fun.

Making the stairs funner than the escalator

Thanks to Sherry for sharing.

Now lets go out and have some fun. I’ll be leaving in just minutes to help volunteers at an elementary school teach 4th graders to make their own animated movies.